It’s been a year so let’s Play Ball!

Well it’s been over a year since Colin had DBS surgery and I’m so happy to say he is better then ever! He signed up for baseball and is enjoying every minute of it. It’s …

Colin had some additional programming on December 5th. We are still working on minor twitching and fine tuning but Colin is doing fantastic! They increased his voltage to 3.5 and told us to wait 2 …

Running with the Big Boys!

This is a photo of Colin running on the football field with his brother. He was invited by the team to run through the tunnel in support of all that he has been through this …

Soccer season is in full swing and we are so excited to see Colin run better than he has in over a year! He is completely off all medication and his voltage is set at …

Hope all of you are enjoying your summer so far. The above photos are Colin enjoying the Fair. We were just so excited that he was able to walk the entire fair grounds all day …

Colin had his head wrap and staples removed on Friday April 6th. After this shot he got new bandages and head wrap that he will continue to wear through April 19th, the date of is his second surgery to implant the boxes. He was so relieved and finally smiled once all was removed. 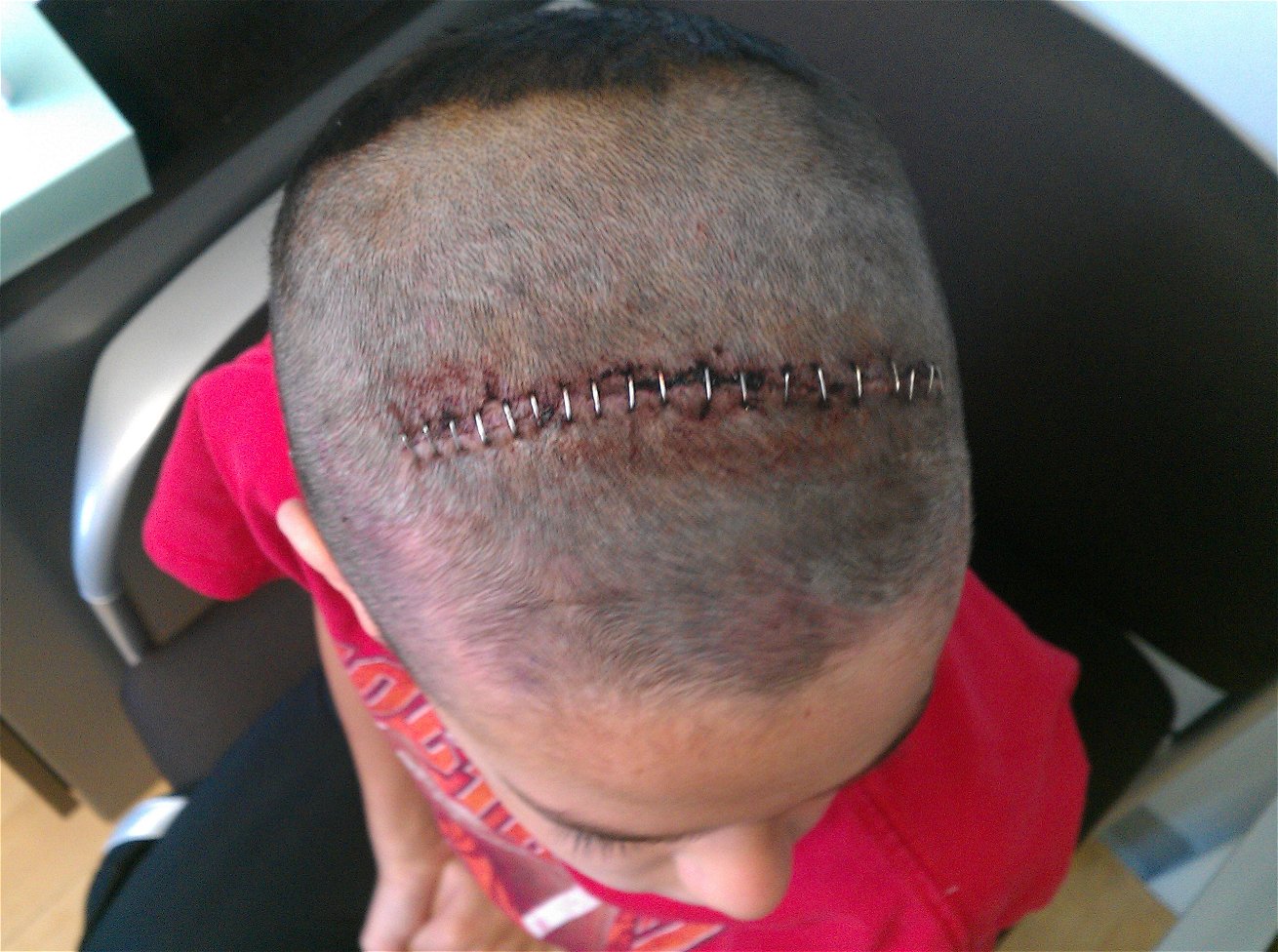 A closeup of the 22 staples that had to be removed plus a few on the side that can’t be seen in the picture. The removal of the bandages and tape from the hair prior to this shot actually proved to be more painful than the removal of the staples. Now we are just looking forward to a successful 2nd surgery and programming.

We hope everyone is enjoying their Easter Sunday!

One Surgery Down, One to Go 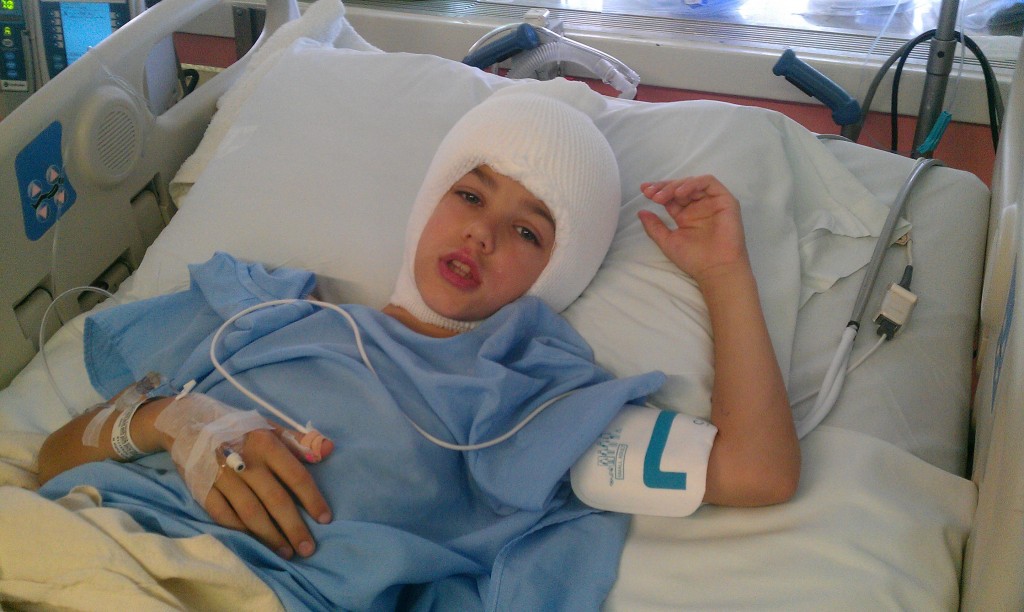 Colin post surgery just after opening his eyes. Everything with the surgery was a perfect success with no complications. He woke up at around 1pm with head pain from the stitches and a really scratchy throat. He will get icechips at 4pm to help with his throat. Right now he is talking and visiting with grandma and grandpa, but still pretty groggy. He will be in ICU for at least two days depending on his condition over the course of that time frame. Thanks again for all your thoughts and prayers! 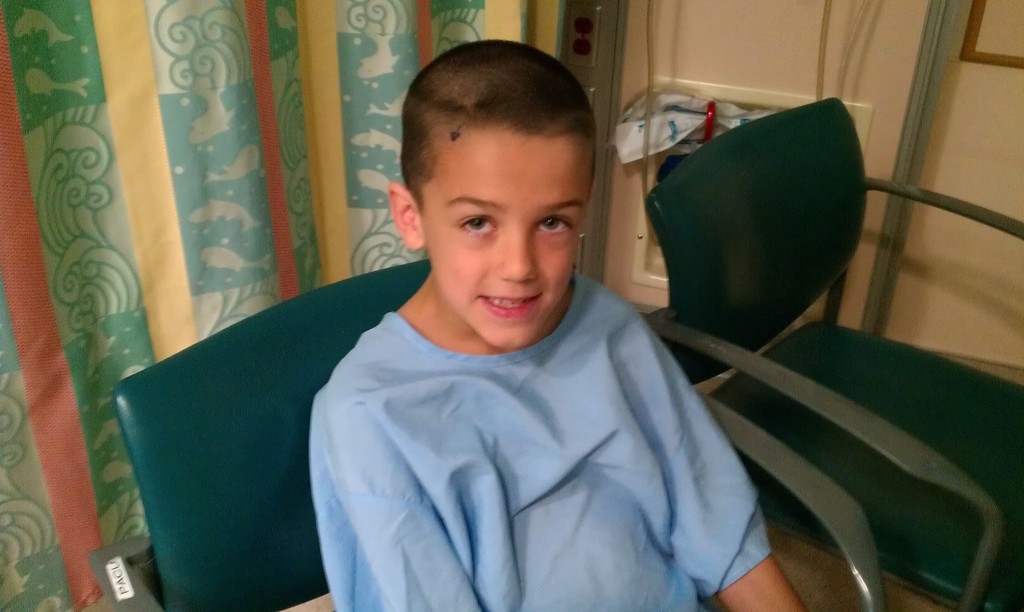 We wanted to give you an update on Colin. We took this photo right before he went into surgery. He seemed in good spirits and just wanted to play his DS football game as long as possible. The surgery started at 8:42 am and we received an update at 10:30 that all is well. They told us the surgery will be between 4 to 6 hours, so we patiently wait. We wanted to thank all of you for your positive thoughts and prayers they are much appreciated right now. We also wanted to thank those of you that have posted a comment for Colin. He has read them all and it really means a lot to him and us.

Breaking Through the Barriers of Dystonia

In early March 2011 when Colin was 6, you would think a completely normal healthy boy as you would watch him race around the bases in his first week of his 3rd year of baseball. He was the fastest on the team, and by all means, took his sports very seriously. Already at the age of 6 with his extreme mental intensity and natural talent for sports of any kind, he was well on his way.

It was along the second week of Baseball that something unexpected started to happen with Colin. He began to have a slight limp in his right leg that at the time we thought maybe he hurt it at school. Over the course of days it developed quickly into a large and very dramatic limp. We asked him several questions about it with little information in return, but wrote it off as growing pains and pinched nerve.

We took him to his Dr Apr 1st when we explained the limp but I also told him of the slight muscle twitch I had noticed in his left foot back in October of the previous year. It was something that concerned me at the time, but apparently not enough to mention to his mom. After a quick checkup he found a clean bill of health physically. He took some blood which all came back negative for heavy metals and several other tests. We were then referred to the Orthopedist, with a soft mention of Neurologist as a subsequent referral.

At the Orthopedist I was hopeful, and still believed everything could be explained away. The twitch was just a pinched nerve and the limp walk (now in both legs) was something like minor pulled muscles, growing pains, or stress from Baseball that would go away soon. Unfortunately the Orthopedist found no pinched nerve and there were no problems with the skeletal muscles or bones, spine or brain that could be seen during examination or at x-ray. As the truth set in and anguish began to overcome us, the fact that our little 6 year old son has a problem inside his brain began to take shape, along with the likelihood that it would not be curable and maybe not even treatable. We were referred to neurology where there was a 6-8 month waiting list!

This was a video I took for the neuroligists. It chronicled through only a couple of months after it first started:

As Colin s gait became increasingly difficult and began looking more like Cerebral Palsy, we made the decision to bypass all this and take him to emergency in order to speed our path to a Movement Disorder Neurologist. He had an MRI for brain and spine and a battery of other tests. The MRI was negative with all blood tests normal, but through physical examination, came back as either Dystonia or Dyskinesia.

Using meds as a means to rule out Dyskinesia, we finally got the appt with the Movement Disorder Neuro who diagnosed Colin with Dystonia. From there we needed to find out the form of Dystonia, this would take a blood test. Two months later it was confirmed as the blood test for the DYT1 Gene tested positive, meaning he has Early Onset Primary Generalized Dystonia, or Torsion Dystonia.

The DYT1 Gene is a mutated gene that causes Dystonia and is the primary form of it. This was heartbreaking news for us as we knew there is no cure and we felt a little helpless at the time. Later we found out the gene was inherited by his mother, who because the gene only has a 30% chance of causing the condition, was able to avoid the condition.

Dystonia is characterized as purely a physical condition (movement disorder), that while it is progressive it is not degenerative in any way. Meaning that while the physical disorder does get worse over time to the point of complete disability, it is not life threatening, nor does it affect the condition of the mind or the ability to think like other similar movement disorders such as Parkinsons or Huntingtons.

As it is today – Colin has been on medication since June. We have tried 3 different types two of which he is still on, Artane and Baclofen. The medications are a mild control enough to allow him to “get around”, but only for a very short period of time before it really falls apart (like 20 steps). The condition is in his legs, hips and has progressed to his right arm impacting his ability to write. Two weekends ago we purchased a wheelchair for use at school since it has become a safety concern. He no longer gets to play at recess with the rest of the kids for safety concerns and because Colin has a tendency to throw caution to the wind.

A BRIDGE TO A CURE

In November of 2011 we took Colin to San Francisco for a consultation with a neurosurgeon who performs a special kind of surgery that reduces the symptoms of the condition. It is called Deep Brain Stimulation or DBS. DBS is a technology that is often compared to a pacemaker for the heart, although its application of the electrical signal is different. With the pacemaker a heart rhythm is kept, DBS however uses the electrical field to effectively block the neuro pathway where the erroneous electrical messages travel in order to cause the condition.

The brain implantation part involves the implantation of two electrical probes deep into the Basal Ganglia (part of brain that controls movement). It is roughly the mid-point of the inside of your head. Part two of the surgery consists of two battery pack boxes implanted into the chest, one for each probe. These battery packs are also signal generators responsible for sending power and signal to the probes. Once the boxes are surgically implanted, the surgery is over, but the correct configuration still needs to be determined. It can take anywhere from one to several months of trying different combinations before finding the correct setting for the subject, everyone is different. The frequency and amplitude are set through the PC connected to a magnet that controls the devices behind the skin.
DBS is not a cure, but is often referred to as a bridge to a cure. Depending on the subject, it can reduce or even nearly eliminate Dystonic symptoms by 60- 99%.

Colin was deemed particularly good candidate for the surgery because of his age and health, and was given the standard 60 95% improvement parameters that everyone is given. The surgery itself, and without disclosing the particularly gruesome aspects of it, is considered to be major, however with consideration to the technology used and the many of these that have been performed, it is considered routine. His age, speed at which we are having it done after intial symptom onset (just days over his year anniversary as of writing this), primary condition aspect of it (the gene), and the nature of his symptoms type, all bode very well in his favor to have outstanding results.

We leave for UCSF in San Francisco on Wednesday, March 28th. Colin s first implant surgery, the brain probes and wires that go to the boxes will be done early morning on Friday, March 30th. Dr. Philip Starr of UCSF will be performing the DBS surgery for Colin. He is highly recommended and is considered one of the best (if not the best) and well equipped DBS Nuerosurgeons in North America. He pioneered the new “Interventional MRI” technology which allows the surgeons to have MRI video imaging while they work inside the brain, rather than standard MRI static snapshot imaging which creates a back and forth scenario. The second surgery of the box implants into his chest will be done on Thursday April 19th.

He is headed down a long road that with hope and prayer, will allow him not only to play baseball and soccer again, but give back his ability to just be a kid again.
We will be in San Francisco for 33 days. More updates to come as they unfold.